Smocking is one of those things that can vary from day-to-day and person-to-person.

This was a fun one. I had originally started out with a triangle in the front of her head. It was a one-ponytail kind of day. She said I wasn't done, so I went to town.

I parted straight over from the back of the triangle on either side and pulled them into elastics.

Then I separated each of the three ponytails in half.

I pulled the inside part of the left ponytail to the left side of the center ponytail.

Then I did the same to the right side.

I left the outmost halves of the ponytails out and curled them slightly at the ends.

I curled the other two ponytails.

And then curled the ends of the hair under. 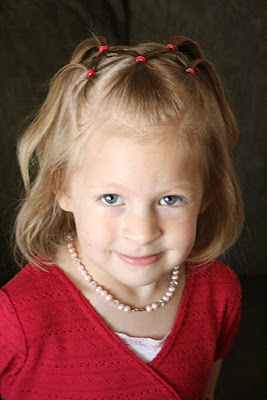 Email ThisBlogThis!Share to TwitterShare to FacebookShare to Pinterest
Labels: Smocking